7 Reasons Why This Dad Is Obsessed With Sports

My boys live in a world that’s so different from the one I grew up in.

Think that’s something all Dads can agree on. Looking at my 2 sons, Jay 10 and Ry 6, they are growing up in a world where so much of their lives are spent in front of screens, big ones and small ones. Even though my wife and I try to restrict their screen time, inevitably, my boys still spend loads of time watching TV, on the computer, on the iPad or playing console games.

Of course, there was TV in my time but it was very much less. We spent so much more of our time outdoors, at the park, at the playground, on the football field and on the basketball court. Outdoor activities dominated my life while I was growing up. Every night after dinner, I’d go to the nearby park to meet my friends and neighbours at the courts and we would either play football or basketball until the lights on the courts went out. I loved it, sports was great.

Fortunately, my wife is also very sporty and so it’s a good thing that she shares my belief and conviction in not wanting our kids to lead sedentary lives. Shouldn’t studies be more important? Why do we feel sports is so important?

This is of course, the most obvious reason why parents get their kids to play sports: to improve their motor skills, to help them develop hand-eye coordination, to get them stronger and fitter. And related to that, to help our kids have better health so that they don’t fall ill as much. 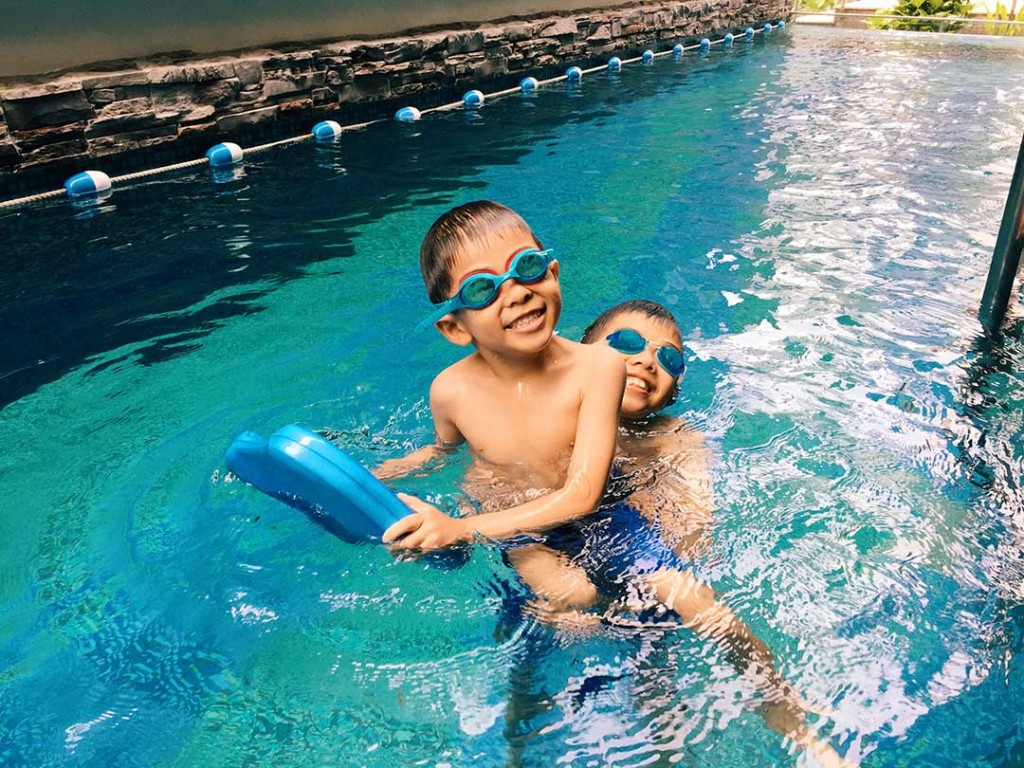 My kids started swimming lessons from when they were three. Swimming is a great way to build health, fitness and strength, but it is also a super important basic survival skill. But other than physical development, I’ve discovered that there’s really so much more to sports.

No matter how good you get at a sport, there’s usually going to be someone stronger, faster or better than you. Life is the same. Whether you are a student or whether you are an adult in the corporate world, it’s the same. Someone is going to be more successful than you. To learn to compete they must first learn to be gracious in defeat. I wanted my kids to know how to be good sports, to not get bitter about losing. But I also wanted them to know the pain of losing and to learn how to use this to drive themselves. I’ve seen kids so fearful about losing that they refuse to even take part in any challenges. 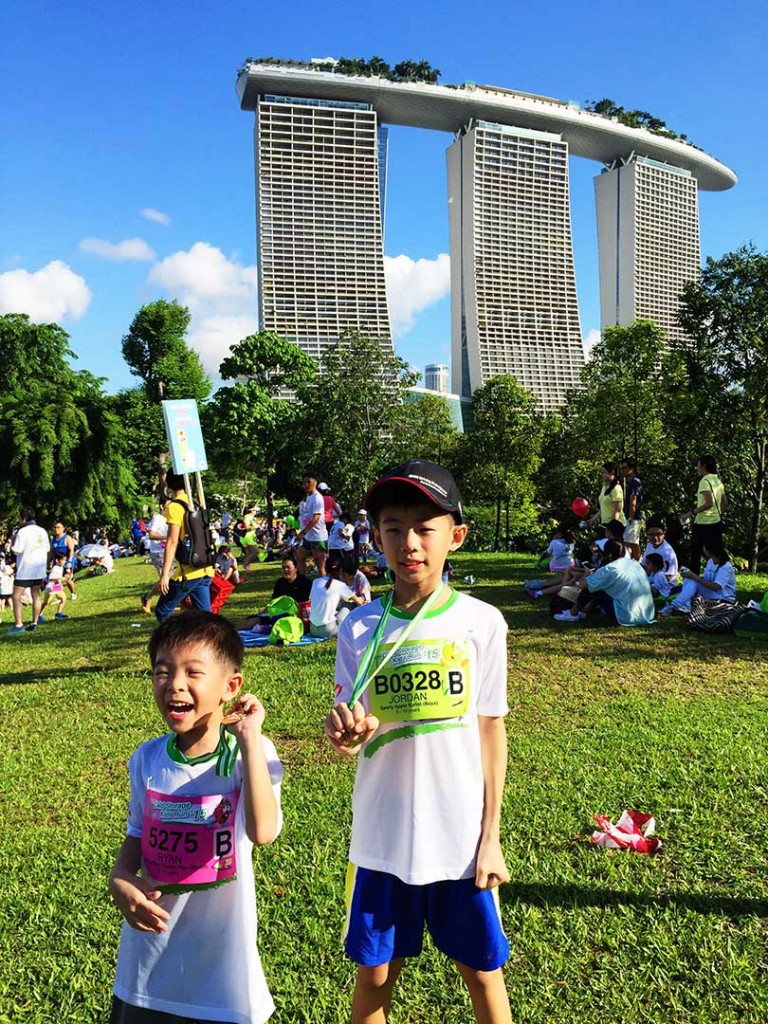 From when my kids were 4, I signed them up to take part in semi-competitive runs like the Cold Storage Kids Run and the POSB PAssion Kids Run so that they could learn the importance of benchmarking themselves, to know that it takes hard work to succeed in anything and to develop the intestinal fortitude required to complete a race. To basically not give up. And I would say this has really paid off. I can see in them this desire to constantly better themselves, to chase goals and to have a internal drive in them to push themselves. As Vince Lombardi says, “Winning means you’re willing to go longer, work harder, and give more than anyone else.”

3) LIFE IS A CHALLENGE

Life is always full of obstacles and challenges, that’s a given. And that’s the same with sports. Being able to set a goal for yourself, working hard to try and achieve it and finally to overcome it, this is a very important process that needs to be ingrained into all kids. In life, the most effective motivator is yourself. If you can’t push yourself by constantly setting yourself new challenges, then you will stagnate. 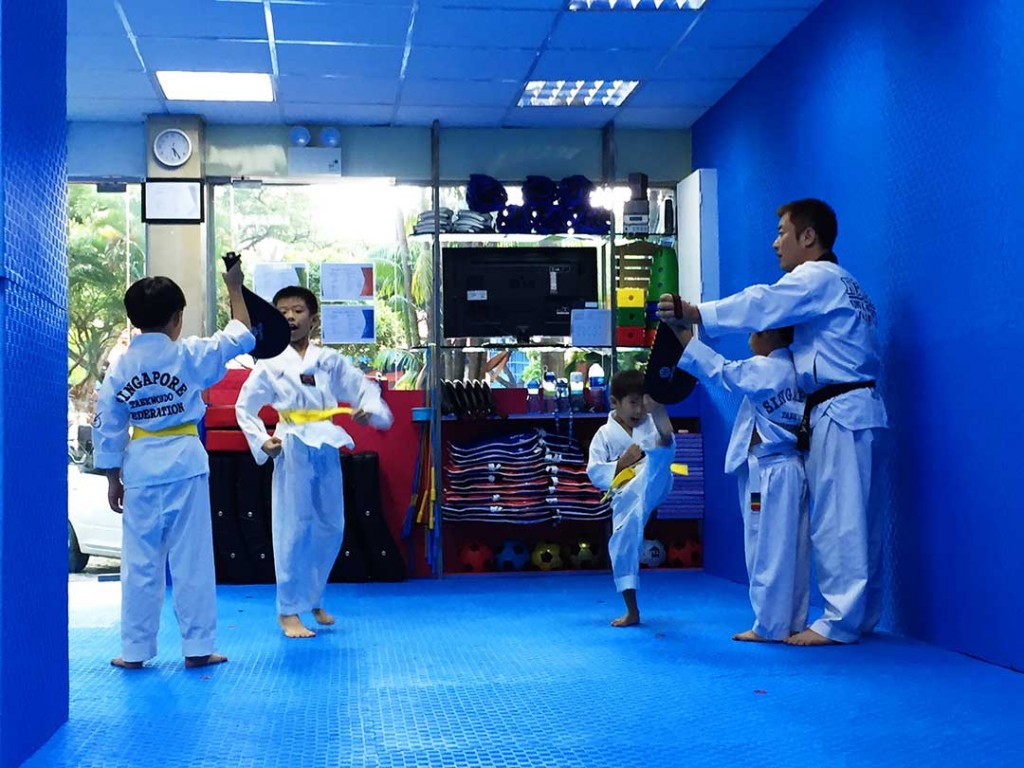 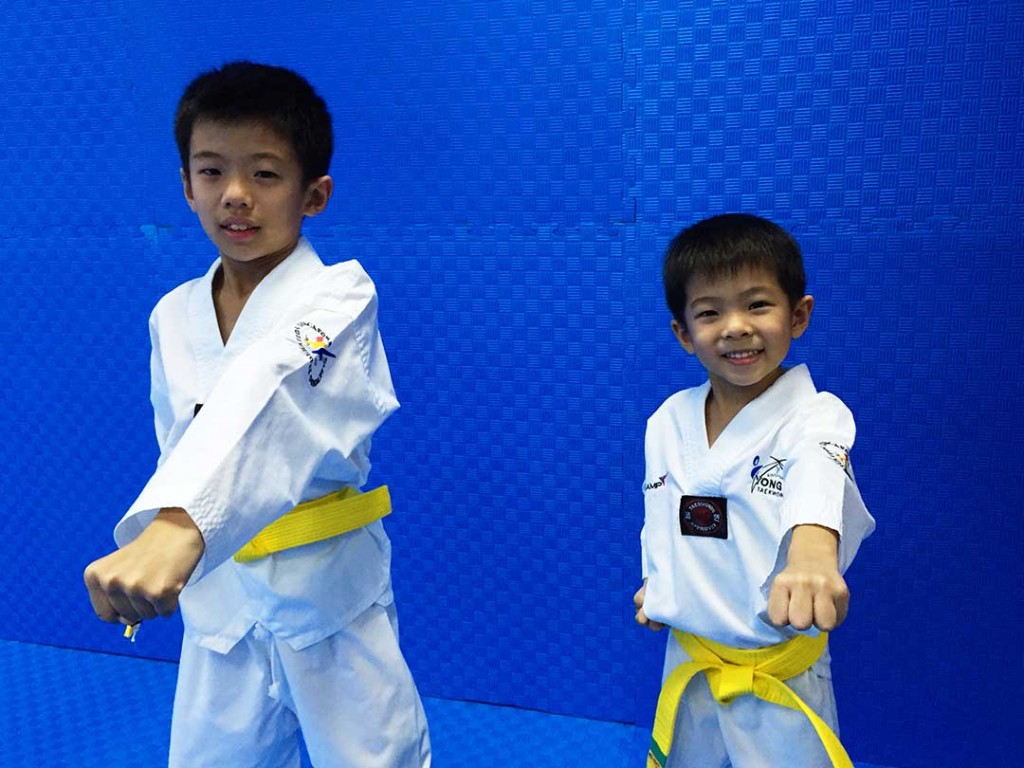 I found that my boys’ Tae Kwon Do (TKD) class was very effective for this. The TKD system of grading, trying to pass tests so that you qualify for higher-ranking belts, works very well in keeping them motivated to always push themselves. They see their peers attaining higher belt levels and they are motivated to practice hard in order to pass their test and get that coveted belt. Without even having to push them to practice, I am happy to see them working on their TKD on their own.

Teaching my kids to ride a two-wheeled bicycle, that was another great way to teach my boys to never give up. Ask any kid at the point when they are learning to ride if they think they can learn it and I’m sure most of them will say that it seems pretty damn impossible. Learning to ride a bike is about conquering fears. It’s not so much about being particularly gifted physically or being able to execute a certain technique. It really comes down to overcoming the fear of falling and pushing through that barrier. Once you get past the fear and peddle on, the rest is physics. 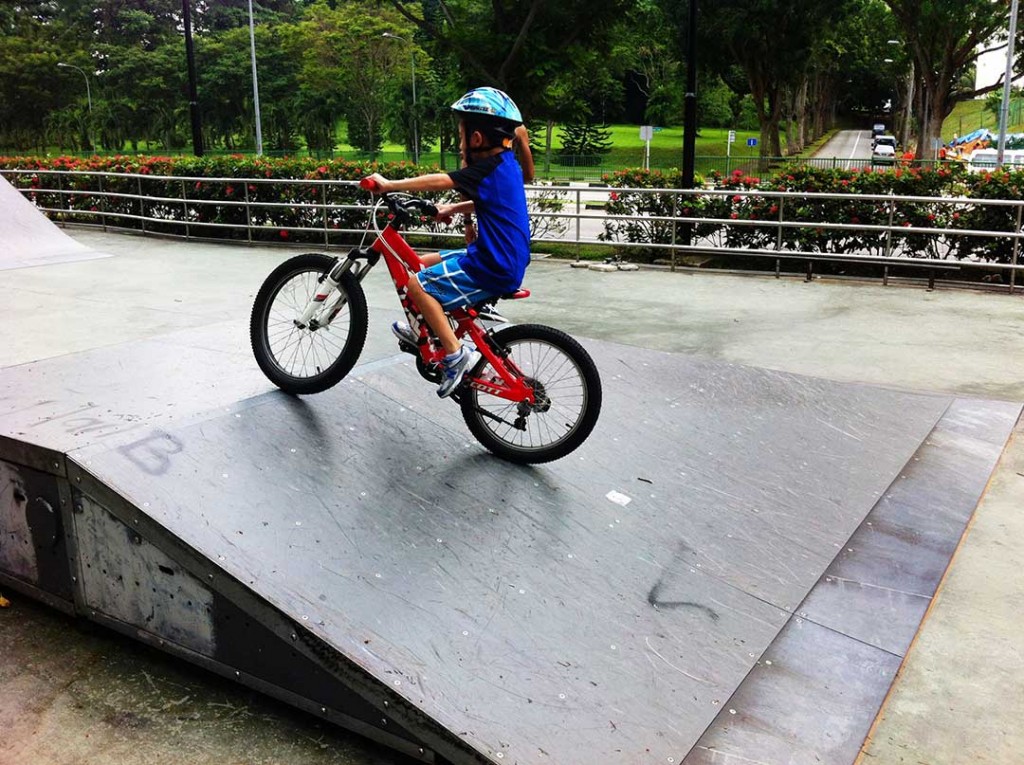 And now that my boys can ride their bikes, it has given them great confidence. Not only are we as parents proud, they themselves can feel proud of their own achievements as well. You can see the pride and confidence this gives them when they see older kids who are still riding on four-wheelers.

Learning to swim without a float has also given them loads of confidence. Why? They just need to look around the pool and see bigger kids, older kids and sometimes even adults who are not able to swim and they can see how their hard work pays off.

Jay just started playing basketball as a Co-Curricular Activity (CCA) in his school about three months ago and since then, I’ve noticed that he has made a lot more friends. He sometimes brings his basketball to school to play during recess and he has also made new friends this way too. I like it that he now has friends outside of his class. It’s good to expand your social circle, especially when it’s outside your usual comfort zone. 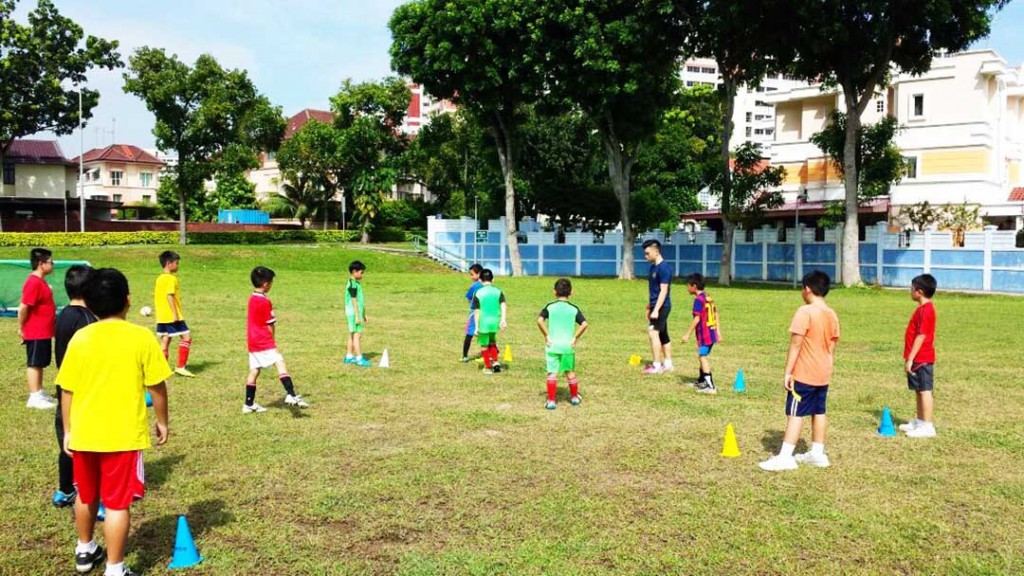 Playing team sports like basketball and soccer has also taught Jay to be more aware of people other than himself. Today’s kids can live in very self-centred worlds and this is even more so when these kids have no siblings. Even though Jay does have a sibling, he can sometimes be caught up in his own world and not have the sensitivity or mindfulness to think of others. I’ve noticed that since playing team sports, he seems to have slowly improved in this aspect. Playing in a team forces you to realise that if players only think of themselves, the team will fail.

These days, playing sports has become a great incentive and motivator. When we tell our boys to finish their work so that we can go to the park, they really knuckle down and complete their tasks. More than being a motivator, researchers at the University of Illinois have found that exercise helps improve kids’ brain health. Exercise helps kids in their cognitive abilities and their ‘attentional inhibition’, which means that they are better able to block out irrelevant information and concentrate on whatever tasks at hand.

SPORTS AS A LIFESTYLE

My kids have gained much from playing sports and I want sports to be a lifestyle for them. It shouldn’t just be something that they take a three-month course in. To get the full benefits of sports, it really should be a lifestyle that they can carry on through to their adult lives. I know that whenever I’m stressed, going for a run or having my weekly soccer game to look forward to, really helps me to get through the challenges in my life. My job as a parent now is to give them this firm foundation in sports, so that they can be well equipped to handle life’s challenges.

As my favourite quote from Michael Jordan says,

“I’ve missed more than 9,000 shots in my career. I’ve lost almost 300 games. 26 times, I’ve been trusted to take the game winning shot and missed. I’ve failed over and over and over again in my life. And that is why I succeed.”