Bringing Taekwondo to the Heartlands

As soon as I felt my kids were old enough to take up martial arts, I immediately started looking around for a good martial arts school that I could send my boys to. I’ve always held a my firm belief in wanting my kids to be active in sports and my wife and I both believed that learning martial arts would greatly benefit our kids. Not only would it be good to learn some self-defence, it would also be a great way for them to stay active and keep fit. I also like how martial arts can help instil in them discipline and respect, values that go beyond just exercise.

I had taken up Taekwondo (TKD) while I was in secondary school and I felt it would be a good martial art to start my kids off on. There are of course lots of different types of martial arts and each has its own strengths but there were a few reasons why we chose TKD:

Why Yong In Taekwondo Education Center

So when looking for TKD schools, I remembered Yong In Taekwondo Education Center. I had driven by the school before and when I checked it out online, I was pleasantly surprised that it wasn’t just ‘another local TKD school’. I was impressed that it was one of the few that was actually owned and taught by a South Korean TKD master, Master Kwon Won Kook. That definitely was a strong plus point for me. I would definitely prefer my kids to have the ‘authentic experience’ of learning TKD from a ‘authentic’ TKD master. So far, our kids have trained under Master Kwon for more than half a year now and I can safely say that he is certainly the ‘real deal’.

[infobox maintitle=”SENSEI? SHIFU?” subtitle=”The proper way to address a TKD master is not Sensei Kwon or Kwon Shifu. He should be addressed as Master Kwon or in Korean, Kwon Sabeomnim which means Master Kwon. But he is not one for titles and he’s happy for his students to call him Mr Kwon.” bg=”teal” color=”black” opacity=”on” space=”20″ link=”no link”] 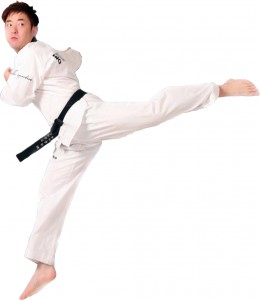 Master Kwon started learning TKD when he was 12 years old. His parents were the ones that encouraged him to learn TKD. Many people had said that he has good motor skills and that he has the right aptitude to learn martial arts. And this sentiment was also shared by his coach at Yong In University who felt that he would also excel in other martial arts and encouraged him to go beyond TKD and to also take up Judo, Hapkido and Yongmoodo. His illustrious martial arts CV certainly affirms his talent for martial arts.

Just like in Singapore, South Korea also has mandatory national service and Master Kwon did his for 26 months. The official martial art for the South Korean military is of course TKD and pretty much every soldier has to learn TKD. Master Kwon was also a military TKD instructor for a few months when he was based at the Army Training Centre to train soldiers.

Beyond his achievements in martial arts, Master Kwon also has a Chiropractic Instructor licence and Sports Massage Instructor license. He took these up when he was studying at Yong In University. In his typically modest manner, he explains that while he has the knowledge and licence, he would not call himself a professional in these areas. But he adds that this knowledge is useful if a student suffers a minor injury in class like a sprained ankle or something like that, he can definitely help the person.

I asked Master Kwon if he always wanted to open his own TKD school and his reply was that growing up, he actually wanted to either be a policeman or to join the South Korean army. But his father was against the idea. The reason was because his father was himself in the army for 35 years, and he didn’t want his son to also end up being in the army. The very filial son obeyed and respected his Dad’s wishes and instead pursued his dream of opening his own TKD school.

He opened his first TKD school at age 29 in Busan, South Korea. The school was called ‘Strong Yong In Taekwondo’ and he was there for 7 years. A friend of his who opened up a TKD school here told him that Singapore was a great place and asked him to come. Master Kwon took up his friend’s offer and came to work at his friend’s TKD school for one month to see what Singapore was like. He fell in love with Singapore immediately and returned to South Korea to make preparations to not only start his Singapore TKD school but to also move his whole family here.

He was smitten with Singapore. He felt that it would be a great place to raise his family and he could also see the potential for TKD in Singapore. He liked that Singapore has a strong economy in Asia and he had his own ideas on how to make the school work. He had observed that a lot of the South Koreans who opened TKD schools in Singapore based their schools in shopping centres. Looking at the heartlands, he felt that this would be where his TKD school should be instead. And in July 2014, he would open Yong In Taekwondo Education Center located at Toa Payoh Lorong 7. Master Kwon believes that his school is the first TKD school to be based in a HDB estate. 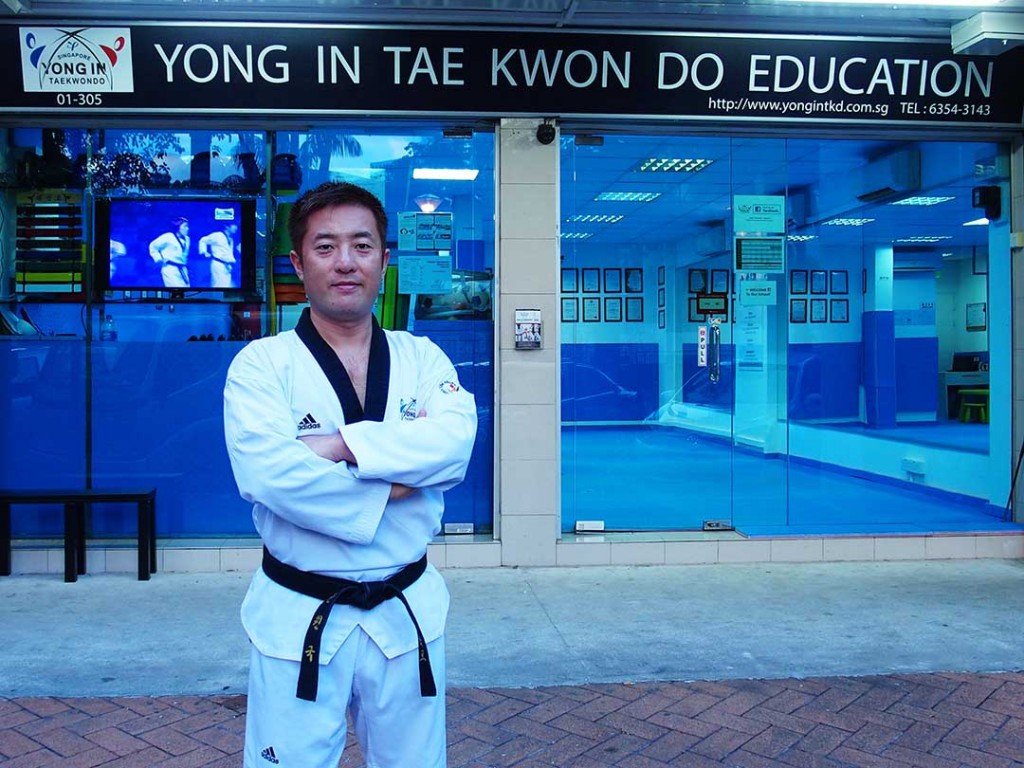 Master Kwon expressed that since coming to Singapore, he, his wife and his 2 kids have all been very happy living, working and studying here. He loves the food in Singapore and he wants to stay here for a long time. I asked him what his favourite foods were and without hesitation he exclaimed, “Laksa and fishball noodles!”

His youngest son, who is now 4 years old, is actually his youngest student at Yong In Taekwondo Education Center. His older son is 7 and currently in Primary 1. He too started when he was 4 and he is now a green belt with blue tip. Master Kwon believes that as a parent, he will always want to give his kids the opportunity to express their views. I asked him what if one day his sons say to him that they do not want to learn TKD but would rather learn something completely different like dancing? His answer was that he would want to find out their reasons and if the reasons were good enough, he would be ok to respect their wishes.

Since my kids have been at his school, I’ve noticed some interesting changes in them. They are more confident, more respectful and also highly motivated to do well with their TKD. I asked Master Kwon if that’s something that other parents may have spoken to him about. He shared with pride that a few parents have thanked him and told him that their kids have changed and improved their behaviour since taking up TKD with him. He felt that it could be because he is very strict with his training and teaching. And because his students see him every week, their behaviour improves from the discipline that he tries to instil in them. Having seen him in action during his class, he is indeed firm but fair. Beyond learning about TKD, he takes the time to also teach his students about respect and discipline.

He felt that a lot of kids these days lack respect and values and that’s how problems like bullying in school occurs. And in that sense, learning a martial art is helpful. I asked if anyone tried to bully him or start a fight with him when he was a student, he laughed and said, “When you are in the TKD team, nobody touches you.”

To learn more about TKD and how it can benefit your kids, you can sign them up for a free, no obligation, trail lesson at Yong In Taekwondo Education Center now!