A Most Unrealistic Labour Plan

Google ‘Pregnancy quotes’ and you will find countless inspirational thoughts on the 9-month process of creating a human being. Quotes like this one – “Babies are bits of star-dust blown from the hand of God. Lucky is the woman who knows the pangs of birth for she has held a star.”

Well, if a baby is a star, then labour is the white-hot supernova explosion in which stars are born.

Here is my most unrealistic labour plan for my first baby.

Labour – just the word itself sounds painful and well, laborious. You hear all sorts of horror stories from mothers themselves, and the movies definitely don’t help – you’ve seen women in labour screaming and/or crying, cursing and/or clawing at their doctors and husbands as their writhing bodies try desperately to squeeze something the size of a a watermelon through an impossibly small opening.

I did not want to be one of those women.

And I was not going to opt for a cesarean to avoid the pain. I believe in pain. Pain teaches us things, and it makes us stronger (if it doesn’t kill you first). Plus, something that my best friend, who has been through labour, said stuck with me – “It’s not a bad pain, like when you skin your knee in an accident. Contractions are a good pain, because you know your body is meant to handle it.”

So when my doctor asked me what my birth plan was. Here’s what I told her (please don’t laugh):

Pain-relief methods: (arranged from least pain to most pain)

And if all that fails, the last resort was an epidural (which I thankfully had on standby).

I can hear you LOL from where I’m writing. Making faces? Music? WRITING A LETTER TO THE BABY? AM I INSANE?

If you’ve been through labour, or have more realistic expectations of it than I did, then you will know how ridiculous these ideas are. The Pain of true labour cannot be absolved by twiddling distractions like games and letters. The Pain demands your full and absolute attention and it will seize your body and mind and soul, if you let it.

It was Day 0. After counting down the last month to my son’s EDD (expected due date), the time had come. It just so happened that I had my OB-GYN appointment that morning. At the doctor’s, we found out that I was one centimeter dilated. She suggested inducing because baby was already estimated to be 3.8kg and looking quite large in the ultrasound scans.

I was not keen on inducing because I really wanted baby to come out at his own time. But we finally agreed to wait until midnight before we would admit ourselves into the hospital for inducement.

All day long I walked and jiggled and ate spicy food while ‘kegel-ing’ in anticipation of labour, but baby stayed put. (They say boys are notorious for being late.)

So at midnight, my husband and I found ourselves with our suitcase and car seat and birthing ball in the maternity wing of Mount Alvernia. They set us up in a delivery room due to storage of suites, gave me an enema and let it work its magic, then stuck a pill up there and left us to try and get some sleep.

Every couple of hours, a nurse would come in and find out how much I had dilated. Every time, the progress was…non-existent. A suite became available and they moved us there, where my husband got to stretch out on the lounge chair and sleep while I bounced on my birthing ball trying to time inconsistent contractions. After 6 hours, a second pill was stuck up there. And after another 6, a third. After 15 hours, my doctor came in and announced that I was dilated to about 4cm, which didn’t sound like a lot to me, but it was enough to break my water bag to induce labour.

Hurrah! Finally we could get this show on the road! My husband and I quickly packed up and were moved back into a delivery room, this time for real. I was put on an IV and given Pitocin, which encourages contractions. A quick Google search acquainted me with some disturbing stories about the drug, the worst one being – ‘A Pitocin labour is much harder than a natural one’.

In other words, all the pain that you would normally go through over several hours would be condensed into a much shorter, intense time.

True enough, after several minutes of being hooked up to the IV, I experienced my first Real Contraction.

See, until that moment, all those false Braxton Hicks contractions and even the real contractions I had experienced earlier that day; while uncomfortable and even capable of making me double over, were NOTHING compared to a Real Contraction.

It started from my lower back and spread across my pelvis and through my entire body. It felt like my bones and muscles were being stretched to breaking point. You know how they used to punish people by tying horses to each limb and then tearing them off? That’s how I imagine it would feel like.

After the never-ending 20 seconds that the first Real Contraction lasted and I could breathe again, I turned to my husband and asked, “Is this just the beginning?” He held my hand tighter and nodded.

Just the thought of the next Real Contraction had me frozen in terror. I can’t do this, I thought, I will surely die. Then I calmed down a little. Okay I won’t die. But I probably won’t be able to push if I have to endure hours of this. This was what my best friend had rationalized to herself when she got her epidural. And even my doctor had said that there was no point forcing yourself to endure the contractions if you won’t have the strength to push at the end. You might even end up endangering the baby. I comforted myself with that thought, and told my husband to ask for the epidural.

When the next Real Contraction hit, my fighting spirit had already left me. So I didn’t hold back, I let loose the most guttural moan I ever heard and let the pain twist my body into a slow tortured dance. The nurse offered me nitrous oxide and I quite literally leapt at it.

Once I had my hands on the gas mask, I did not let go. My husband tells me I shut my eyes from the first inhalation until they pried the gas mask away from me when the anesthetist arrived 20 minutes later. I lived and breathed, literally, in the world of laughing gas where the pain was present, but distantly so. He also tells me that I kept apologizing for pooping, though I didn’t (it certainly felt like I did), and that I was very polite and thanked the nurses and the anesthetist for taking care of me. I have vague memories of all this, as if I was there to witness the whole thing outside of my own body.

When I was nearing the finishing line, my doctor burst into the room and asked teasingly, “What happened to natural birth?” In between tired breaths, I told her I had never felt anything like that pain of a Real Contraction. She smiled and made a joke about the music that I had asked my husband to put on earlier (The soundtrack from ‘Wicked’), then got down to business.

I remember the moment I was asked to push – my doctor was on my right side, and a pretty Indian nurse on my left. They had my legs pressed up against their hips and told me that on the next contraction, I would have to breathe in, hold my breath and push. The nurse specifically said not to exhale as I pushed, which I did the first two (failed) pushes. But after 4 successful pushes, they told me my baby’s head was out. Yay? I thought, because I couldn’t feel anything from the waist down. 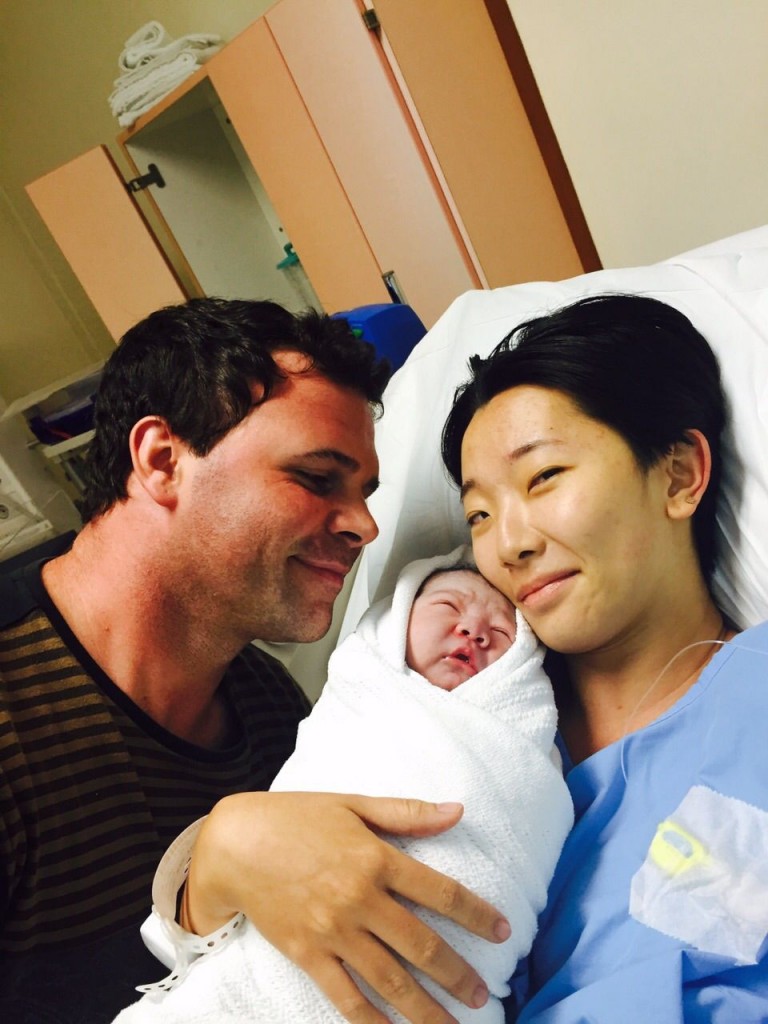 Powdered milk, I remember thinking, he smells like powdered milk. And what huge hands he has! Those were my first two thoughts when I met my baby for the first time. He opened his eyes for a split second and looked right at me, then closed them and was whisked off to be weighed and measured. (3.83kg, 55cm) 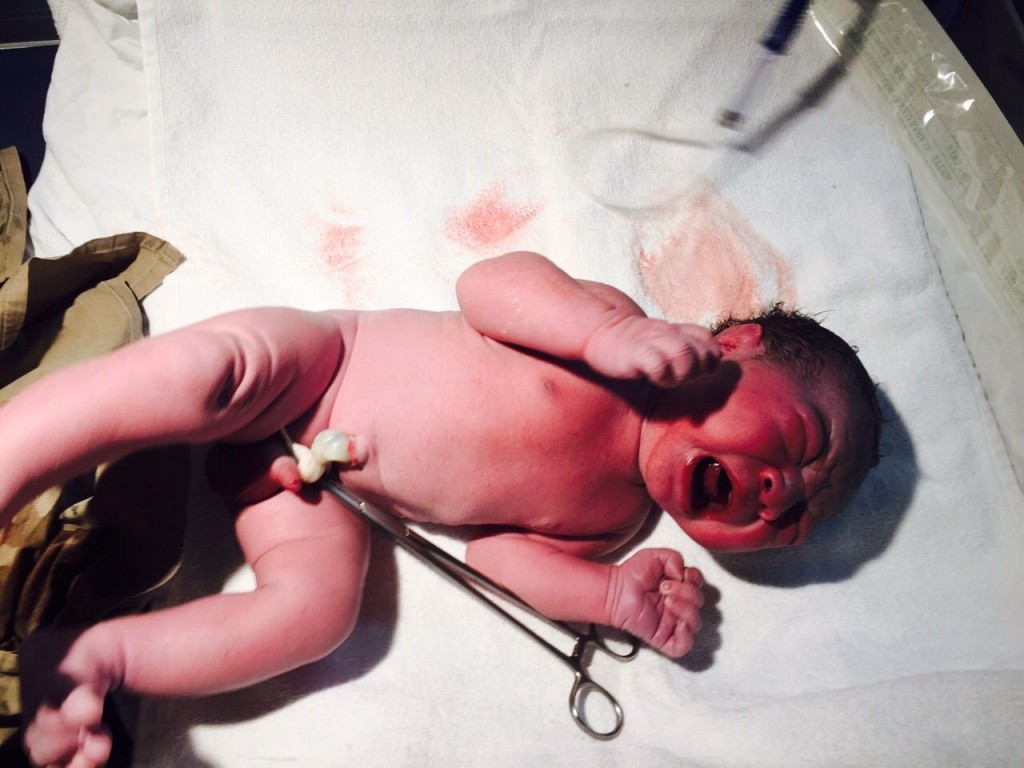 They say some time after labour, your body releases a chemical that helps you forget the trauma so that you would be willing to go through it all again. If that is true, then I am glad that I have this account to remind me.

Labour is truly about the strength of your mind. It is not about how many kegels you do daily; or how many pre-natal books you read; or how many breathing classes you attend. If you let the pain take you, then you will give in, like I did. Barring health and safety reasons, you will get the labour that your mental strength is capable of. So before you make an unrealistic labour plan, confront yourself and really ask, how strong is your spirit? If you’re not sure, then have the epidural on standby, and remember that it will take some time to get there.