10 Baby Items I Can’t Live Without

By Vivienne Tseng Parenting, Products May 28, 2015

If you didn’t read my previous article on 10 baby things I regret buying, I lamented having a Moses basket and a bassinet because a car seat can replace both, and then some! A car seat is first and foremost, required by law for baby to ride in the car. Even though I don’t have a car, I still get to use the car seat in taxis; in my friends’ cars; and on long bus rides (for e.g to Cameron Highlands).

In addition, a car seat is a great ‘bassinet’ for your stroller with just a couple of adapters. I find that it’s smaller and lighter than most bassinets, but is just as comfortable for baby. In that same vein, a car seat is a great rocker too! When you place it on a flat surface like the floor or a table top, the car seat can easily rock back and forth gently. I personally like to place it on the floor and use my foot to rock it while I’m busy working (like now).

I decided not to get one at first, believing that it was more of a ‘luxury’ item than a necessity. But luckily, the lady I bought a secondhand changing table from, threw in her old nursing pillow to sweeten the deal. It was just a standard donut-shaped nursing pillow, but oh my goodness it is well worth its weight in gold. 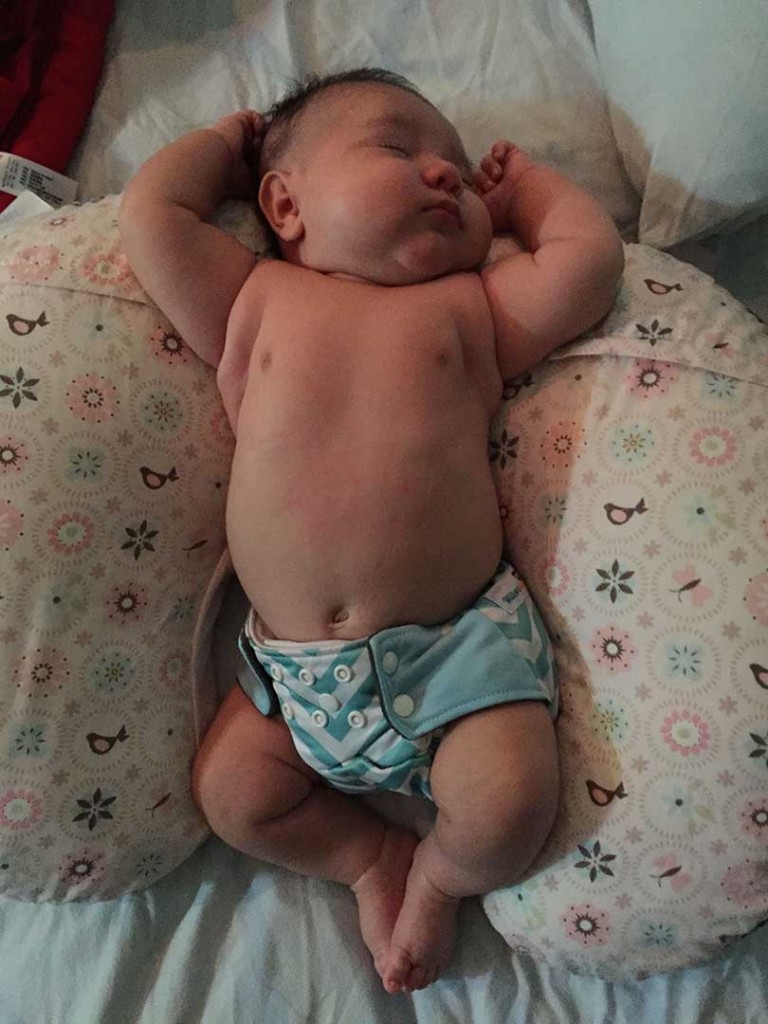 Firstly, nursing baby for up to 30 minutes 12 times a day is much more bearable with the support the nursing pillow gives. Secondly, baby loves to go to sleep in it and there is no risk of flat head because we let his head hang a little over the top, as demonstrated in the photo. Thirdly, the nursing pillow is the perfect shape for baby to do tummy time on! 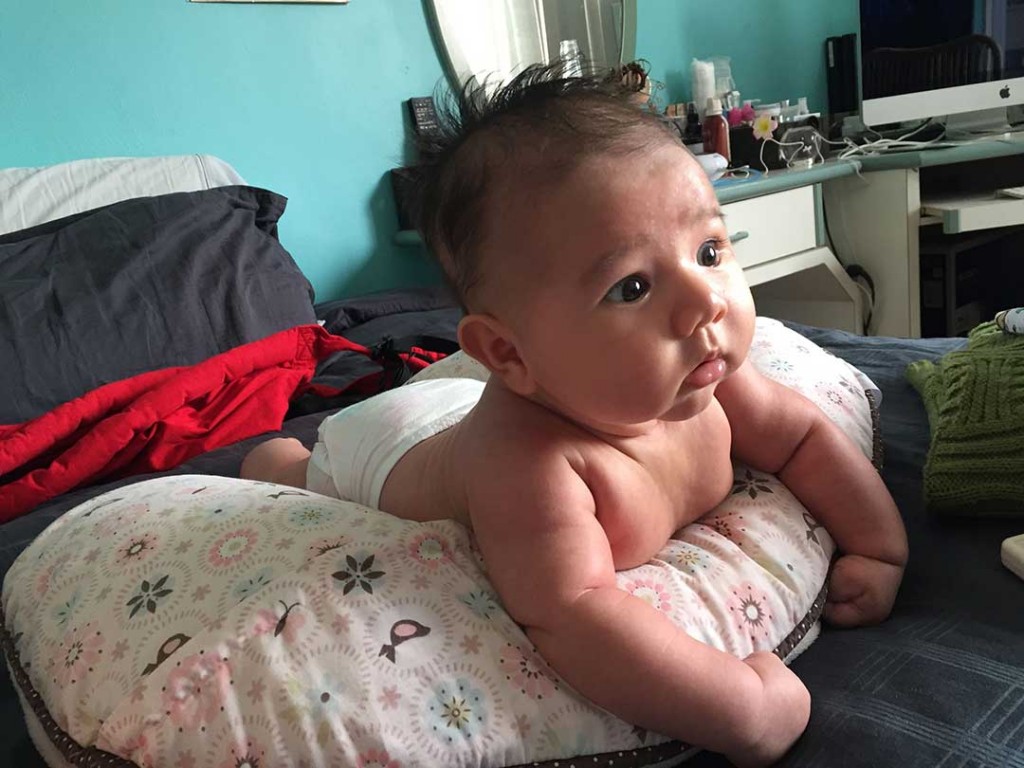 In my previous article, I mentioned that I had bought the Ergo Baby 360 Carrier (with the infant insert) in anticipation of those cuddling walks I would take baby on. However, the infant insert proved to be too cumbersome and warm for baby and I, and without it, the Ergo was not suitable for an infant who could not hold his head completely upright yet.

I was about to resign myself to just carrying baby in my aching arms when the SG50 Jubilee Baby Gift arrived and with it, an SG50 baby sling! I was hesitant at first, and there is a short learning curve to using it, but after the first couple of times, the baby sling is my go-to whenever I need to bring baby anywhere quickly. Unlike the Ergo Baby, the sling is just a piece of fabric without additional inserts and whatnot, so it is simple to slip into and does not encase baby in too much material so he gets too hot. That said, since my baby reached 7kg two weeks ago, using the sling to carry him now gives me a tremendous backache. But maybe I just need to try a different carrying style. There are several you can choose from with the sling, which makes it versatile too.

I cannot count the number of times that my husband and I suspected that baby might be feeling unwell due to his incessant crying. Thankfully, before pestering our pediatrician or rushing to the A&E, we took his temperature with our trusty Braun baby thermometer (which is labeled as the pediatrician’s number 1 choice!) and realized he did not have a fever, which made us think twice about him feeling unwell. Turns out, baby was usually just gassy or fussy because he didn’t want to go to sleep.

Before baby was born, I got it into my mind that my baby would never get a nappy rash so I would never have to use nappy cream.

In baby’s first two weeks, he developed a nasty nappy rash. This was largely due to my mistaken thinking that redness around the bum was perfectly normal and allowing the slight irritation to develop into a full-on diaper rash without doing anything.

My husband eventually got to change the diaper and was horrified to find angry red peeling skin around baby’s bum. He promptly told me to buy Desitin, which is the brand of nappy cream he was familiar with. I found Desitin on my trusted baby website Kulily.com (at the lowest price I’ve seen) and asked if they could ship the item ASAP. They sent the item within the same day and we immediately started applying it to baby’s bottom. Within two days, the rash fled.

Since then, I keep two tubes of Desitin on standby, and use it at the first sign of trouble.

6. Gripe water / Anything to get rid of gas

Similar to my naïve thinking that my baby would never get nappy rash, I also believed that my baby would be immune to gas pains. This was until baby woke up crying at 5am two nights in a row. Nothing we did could pacify him, until we put him on his tummy and he let forth a series of toots for a full minute. After that, he was perfectly happy.

However, tummy time takes a while to release the gas, and it doesn’t always work. So I researched and found that gripe water was a safe substance to help baby with gas pains. We bought a bottle for emergencies, and have had to use it several times now to great effect. We simply drip 0.5ml into baby’s mouth and within 30 minutes, hear the soothing cacophony of farts, followed by the happy coos of a gas-free baby.

No I am not getting commission from Stokke to sell their product but truly, this has been a lifesaver for my aching back when it comes to bathing baby, and theirs is the only one I know of in the market. It used to be such a chore to have to support baby’s neck while trying to make sure water doesn’t get in his ears, WHILE trying to bathe him as well. With the support, you’ll have one less thing to worry about. Baby can sit in the tub without your help, and it pretty much fits into any bath. Just so you know, I’m using the free bath tub that Mount Alvernia gives.

Once my milk came in and breastfeeding became routine, I found out that letdown occurred into both breasts, even when baby was only feeding from one. That left the other breast to drip milk all over my bra and shirt. And at the beginning when every drop of breast milk is precious, I found that such a waste!

Luckily, I found out that you can easily collect those valuable extra drops with breast milk shells! There were only two brands I found here in Singapore – Medela and Philips. I bought the former and must say it has been such relief to just insert the cup between my breast and my bra and watch the precious drops of milk get collected.

I did so much research before narrowing it down to two options – the Bugaboo Chameleon or the Uppababy Vista. Luckily for us, we found a secondhand Uppababy Vista for just $300! This is a stroller system that retails at $1500 so that is an amazing deal, especially for the great condition it was (and still is) in.

To date, we have brought the Uppababy with us to the park, on nature trails, and to Boracay right on the beach. It has survived plane travel, sand and soil and rain. Plus it is great for grocery shopping because of the huge undercarriage space. Not that I’m saying you need the same features in your stroller, but the important thing is to know that you’ll likely be using the stroller a lot, especially if you like bringing baby on walks to get him to fall asleep. A less expensive stroller might sound like a good deal upfront, but when wheels start to fall apart and the padding rubs off, you’ll spend more on repairs and replacements.

10. If you can, a solid baby crib that grows with baby

I’m swear again that I’m not working for Stokke but their Sleepi crib is by far, the most beautiful baby crib that grows with baby over the years. My husband and I mulled over getting the it for the longest time, and finally caved when Motherworks gave us a discount and threw in shipping for free. It still cost a bomb, but we figure it will be worth it for 10 years (or so Stokke claims)

I must admit that baby does not sleep in his crib every night, mostly because he has yet to sleep through the night and I am too lazy to move him to and from the crib every 3 hours. But even for the first part of the night, it’s great that baby has his own sleeping place, so that mommy and daddy can cuddle on the bed for just a while. The same goes for daytime naps. The cool thing about the Stokke is also that it wheels from room to room smoothly, which is perfect for us when we need some space from baby.

We have yet to ‘grow’ from the Sleepi Mini to the Sleepi for toddlers, but we are hoping that the Stokke will live up to its claim that it will save parents the trouble of having to transition baby from crib to crib.

There you have it, my top 10 baby items that have made my life that much better. What’s in your top ten list? Share it with me in the comments below!