When I told people my intention to travel to Boracay with my baby one month after he was born, I got looks that read, “Are you crazy?”

Some people even voiced the thought out loud. And those people were my friends. But they were just being realistic because everyone knows what a nightmare it can be to travel with kids, especially babies. But to travel just a mere 30 days after labour? That seemed insane.

But after my somewhat speedy post-labour recovery, as well as the conviction that we have a pretty well-behaved baby, my husband and I decided a beach holiday would be worth the risk for all of us.

Plus, we had to attend a friend’s wedding.

So we began preparations for our first holiday with baby. 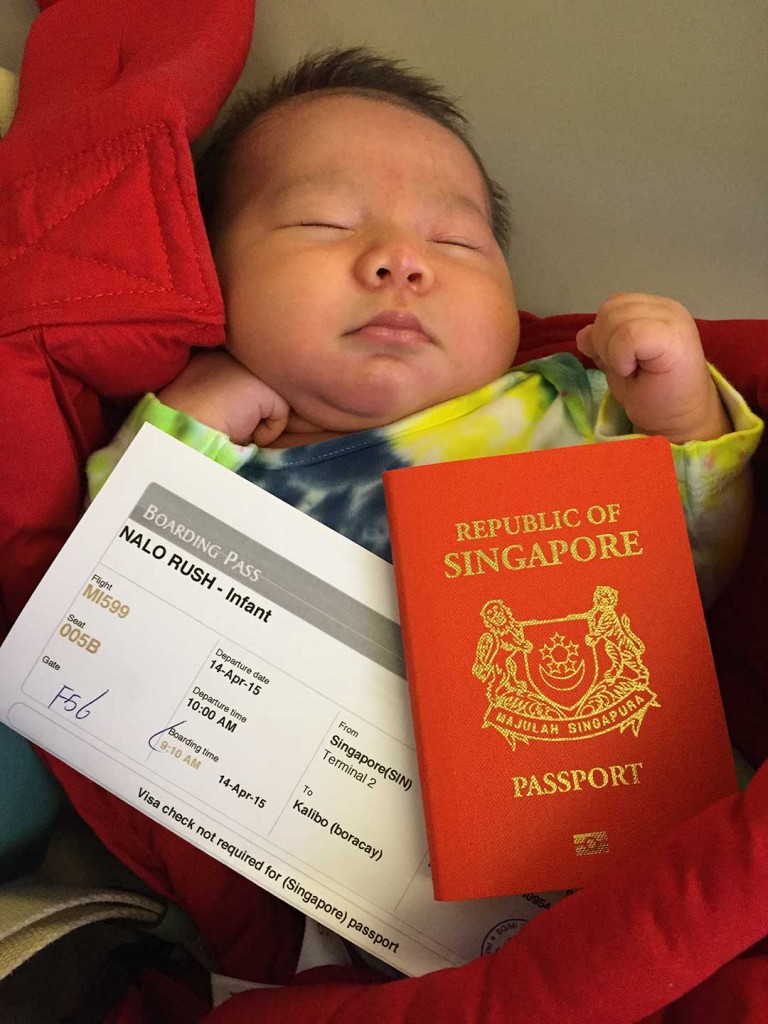 Getting his passport was the top priority, so once we brought baby home and settled him in, we quickly launched our attempts to take a decent passport photo. It was not that difficult to get baby to look at the camera while he was awake, but I ended up having to Photoshop the white background necessary for passport photos.

After submitting baby’s passport application online, it was just under two weeks before ICA notified us to pick up his passport. Talk about efficiency!

The best thing about traveling with baby is that he travels free (until he’s two)! We chose the seats that allowed us use of the baby bassinet, and just so you know, you can’t bring your own – you have to use the bassinet provided by the airline. The bassinet isn’t the most comfortable and tends to tilt so be prepared with your favourite baby blankets.

Now let me address the elephant in the room – how baby dealt with the pressure change during take-off and landing. As I walked down the jetway to the plane, this was the giant dread hanging over me – that I would have an inconsolable crying baby whose wails would echo in a metal capsule in the air for 4 hours.

So what did I do to avoid that?

Firstly, when I was buying the plane tickets, I chose a departure time that was around baby’s feeding time, which in my case is around 10am. This is because, after much research, I found that only two things can help baby to relieve the pressure while flying – a little rum in the gums or feeding. I chose the latter.

Armed with a nursing cover and dressed to nurse, I kept baby in my lap and managed to stave off feeding him until the plane was on the runway and preparing to take off. And voila! Baby was perfectly happy throughout the flight (He slept through most of it).

Remember to keep your diaper bag handy for diaper changes and have a spare outfit on hand, for both you and baby. (Baby threw up on me on the flight back after he drank too much, and I had to walk around the airport in crotch-stained jeans)

As for accommodation, I made the mistake of choosing a rustic beach hut through Air BNB. Don’t get me wrong, the place was beautiful and we could step right off the porch onto the beach and into the gorgeous ocean. Plus, it was away from the VERY crowded and noisy White Beach. It was perfect for a romantic getaway – secluded beach hut with a view so we wouldn’t have to leave the room except for food and water, and when we wanted to dip in the beautiful waters.

That was the plan. 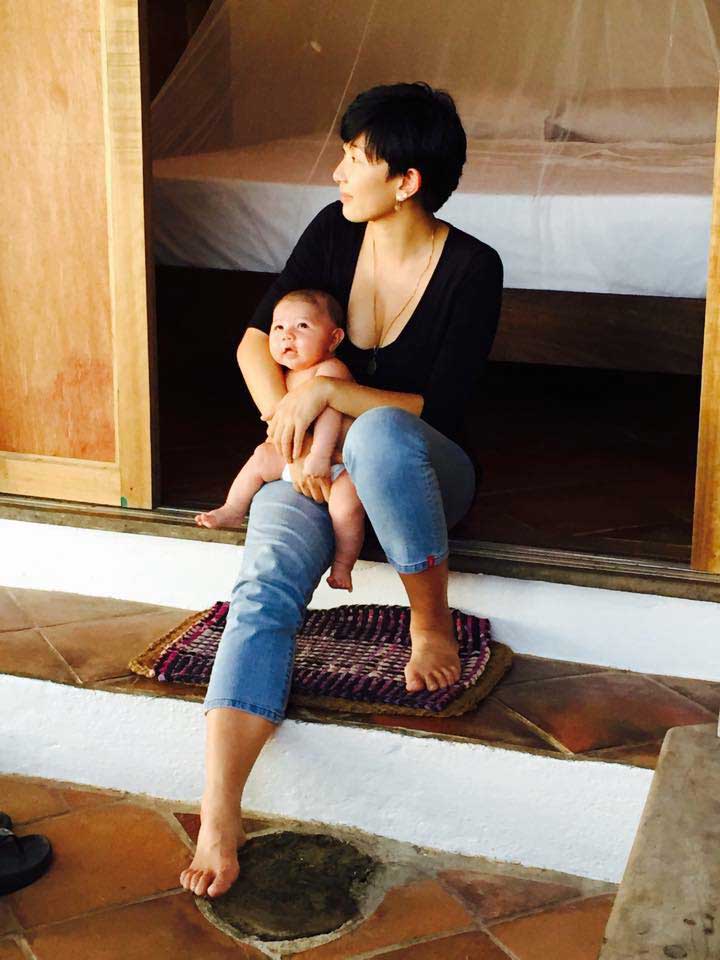 The reality was a beach hut with a floor scattered with sand, a sink with ‘rustic stains’, bugs at night, no room service (I didn’t think I would miss it but I did), and AN AIR-CONDITIONER THAT DIDN’T WORK. Everything else I could handle, but the last one did us in. Baby would sweat just lying on the bed, so it was impossible for him to sleep soundly. That first night, we all tried to stay as close to the fan and air-con as possible. The next morning, I managed to get enough of a wifi signal to contact the Air BNB host and within 24 hours, a small construction crew (which in Philippines means one man) came to take out the old unit and replaced it with a new one. Granted, the new air-conditioner wouldn’t go below 27 degrees Celsius, but that was heaven compared to what it was previously.

Also, the hut’s feature of being right on the beach became the bane of our holiday every single time we wanted to go somewhere because we had to drag our stroller through the sand and rocks. And we didn’t even go swimming. The one time I tried to introduce baby to the ocean, he gave me his ‘about-to-wail’ face when the water touched his foot so we backed out.

To be fair, baby and I spent a couple of mornings just sitting under the tree, enjoying the sea breeze as we counted the different shades of blue in the ocean. I will hold that memory dearly (while attempting to erase the memories of coaxing a sweaty baby to breastfeed, and of wrestling with a stroller on the beach).

After all the drama, if I had to do it again, would I? 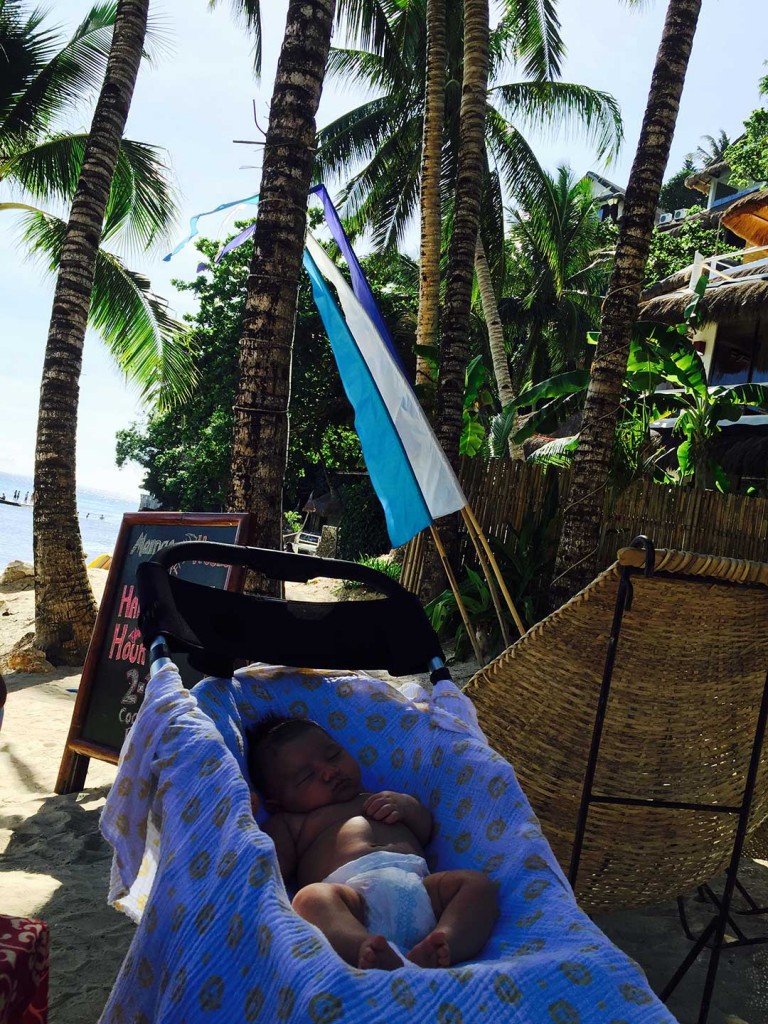 I would have to say yes, even though the holiday was far from what I had planned and even after having to breast-feed a wailing baby in a sling in a ferry terminal packed full of tourists while trying to maintain my modesty. I would do it all over again because I realized one thing – it would have been just as insane if we had stayed home in Singapore. Sure, we may have more creature comforts and support from friends and family, but life is more than just being comfortable. Living sometimes means enduring some discomforts so you can better appreciate the comforts you do have. What doesn’t kill you makes you stronger, as a person and together as a family. And as a bonus, such experiences make great stories during Chinese New Year and Christmas so you don’t have to go through the same awkward repetitive question-and-answer interrogation with every aunt and uncle.

I would do some things differently though. I would stay at a lovely hotel with air-conditioning and room service. With a baby in tow, there’s no point in creating unnecessary challenges, especially if lack of air-conditioning is standing between you and a happy baby. As for room service, well, you’re on holiday! After having a baby! You deserve to have someone bring you fries and ice cream while you lie in bed. Oooh and you should book a hotel with a spa so you can get a good, relaxing massage while you’re there. And maybe a mani-pedi too… 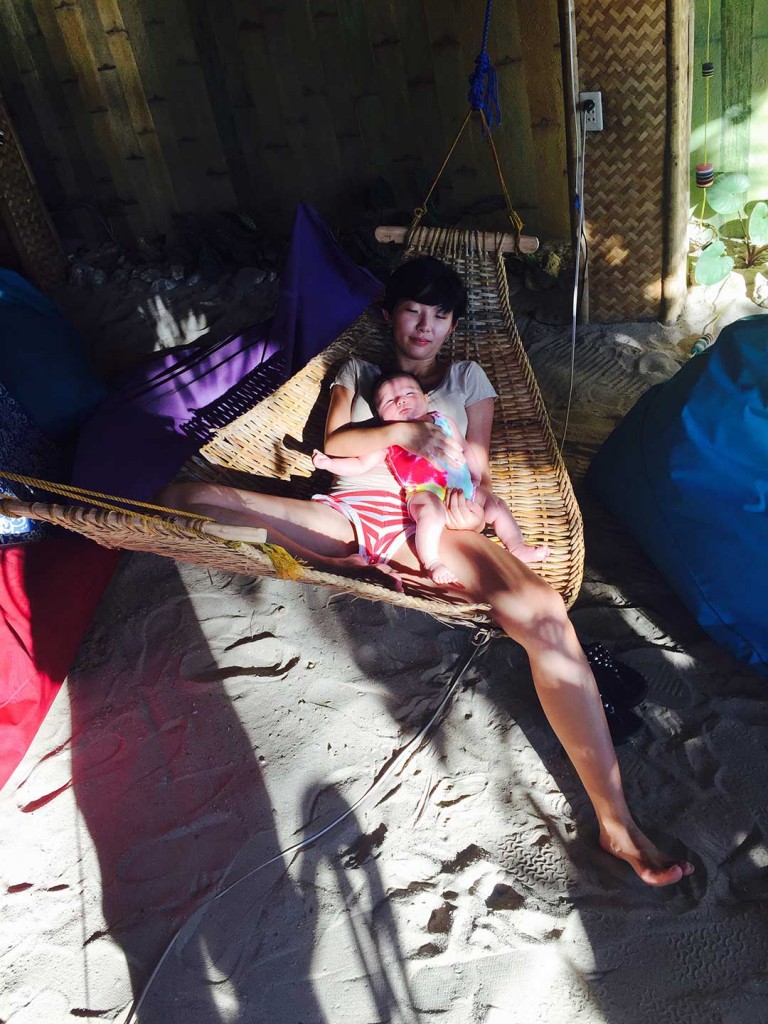 Oh who am I kidding. I want those creature comforts! So just skip the travel (that’s the hardest part) and book a staycation at a local hotel. Or better yet, just get a house-call masseuse and get food delivery on FoodPanda. After all, you have a baby! You don’t need to travel anywhere else in the world when all the fun and excitement is happening right here under your nose. He’s your whole world now, and you are his. Concentrate on that and leave the traveling to when he’s old enough to actually appreciate it.

But if you do have to travel, for whatever reason, remember to learn from my mistakes and be prepared. Be very, very prepared.